I have not posted a blog for many, many months and I return to it today because of an artist I had to write about. I think his work has kickstarted my interest in sharing amazing ways that drawing can be used for communicating and connecting.

George Butler is an artist and illustrator specializing in travel and current affairs. His drawings, are from areas in the world that focus on current affairs and conflict. He goes to these places and captures his observations in pen, ink and watercolor. His work as a reportage illustrator captures much more than any photograph could ever capture. He travels through difficult landscapes and political and economic issues. 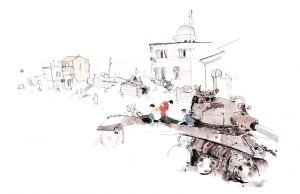 In this drawing from Syria Butler writes:

If you arrive from Kilis, Turkey this will be the third thing you see, the first is an abandoned tank, the second a petrol station blown inside out, and this the third, around the corner form the bakery and in the shadow of the mosque tanks lie half buried.

Children rotate the turret of one of them. An older kid sits in the bottom of one picking out the bolts for later use. It becomes all the more real when you stand on a pile of bullet casings in the knowledge that someone was here being shot at, shooting back… who knows what happened after that but this scene is the eventual result.

The short film, 2300 Miles to Work  film maker Tim Brown teamed up to make a documentary film about migration with George Butler. This film depicts one of the most important stories about the migration of populations of people living in worn torn areas of the world. In an interview last month with The Guardian, he said, “The skill is to use drawing as an interview technique for an entire situation. I make visual notes in ink as time passes. It isn’t all about conflict. The drawings are of more common experiences than those on our front pages, they are of unfolding scenes, of habits, of stories, or of a single character.”

I thought about how profound the act of drawing, and specifically his act of drawing is. It is about using drawing to make connections within yourself and among different groups of people, connections between points on a map, finding a common thread of humanity, all the while making you think about a bigger picture.

I will leave you with one more link from his website where he talks more about his drawings.